He’s ten feet tall and not bulletproof. At least not for Hannah’s bullets.

It’s been one year since they’ve met. He’d thought it would be safe to see her again after all this time, but no, she shot him right in the heart the moment he reappeared on her doorstep. It’s weird. He feels no pain. There’s only this crazy burning flame, tearing his body apart.

‘Normally I don’t behave like this,’ she says, hiding behind the half open door.

He knows. She’s not the shooting type. She’s sweet and charming, even a little shy. Not the type of woman he’s used to. She stares at him. Her eyes are veiled. What is she thinking?

‘It would be better if you’d go…’ she whispers.

He knows he should, but he can’t move his feet. Flashlights explode in his head, alarm bells are screaming in his ears and there must be something seriously wrong with his eyes. The only thing he sees clearly is her beautiful face, her slender body. Everything else is a blur.

Part of him wants her to close that door, but no words come from his tongue. He’s too numb with fear to cry out, lost in a universe where his safe world of wife and daughters is rapidly fading. Only God knows what will happen if he steps over that threshold.

‘My husband will be back soon.’

Finally her eyes lock with his and her smile tells him she really knows.

As he is hers. 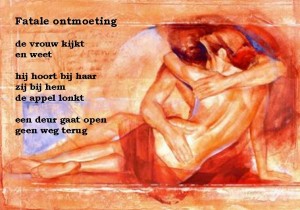